Swimming with dolphins from Pico Island in the Azores

Meet the locals with wild dolphin encounters from Pico Island in the Azores.

With some of the largest populations of dolphins anywhere in the world, wild swimming is one of the easiest and accessible ways of witnessing cetaceans in their natural environment. Get to know the playful nature of these endemic species, following them as they play on the waves!

Location
Previously a strategic lookout for commercial whaling, today Pico Island in the Azores is one of the most popular for cetacean tours and wildlife encounters. The largest of the three main islands, the marina is situated at Lajes do Pico and can be reached  by flying to  Horta (Island of Faial) and then getting the ferry from Horta to Madalena do Pico, with a crossing time of just 30 minutes.

Activity
Meet the team at the activity base in Lajes do Pico for this wild snorkelling and dolphin excursion. Organised according to the weather and time of year, boats will set off from the port with a dedicated marine biologist. During the three hour excursion, your skipper will be in contact with a ‘Vigia’ or lookout that will guide you towards pods of dolphins that play and feed along the coastline. Dropping anchor as and when the pods arrive, jump in the water in pairs of two and get to swim around these curious creatures – learning more about their nature and their behaviour using snorkels and fins to keep up! Once everyone has had a chance to swim with them in the marine protected area, you will return to the port where your adventure will end.

Conditions
This activity operated during April – October and boats are organised according to tides and ocean conditions. Due to the nature of this tour, dolphin encounters are frequent but not guaranteed. Regular sightings include Risso’s Dolphin, Bottlenose Dolphin, Striped Dolphin, Atlantic Spotted Dolphin & Common Dolphin.

minimum 1 y/o
Cancellation policy:
flexible1) Cancellation 4 days or more prior to the agreed activity starting date
→ You are automatically refunded for the full activity price 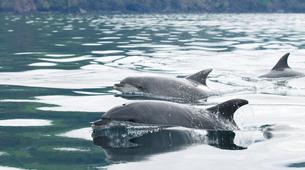 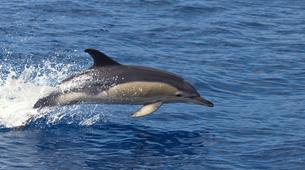 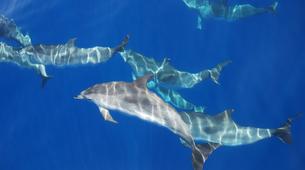 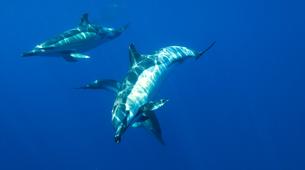 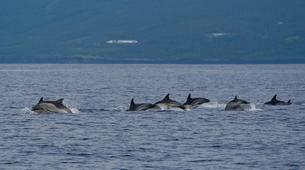 Your activity Swimming with dolphins from Pico Island in the Azores