Bringing nature to life, the Azores are considered one of the best places in the world to see ocean giants like sperm whales and blue whales. A marine reserve with increasing populations of resident and migrating cetaceans, explore the horizon for stunning breaches and porpoising behaviour from the island of Pico in the Azores!

Location
Previously a strategic post for commercial whaling, today Pico Island in the Azores is one of the most popular for whale watching. The largest of the three main islands, the marina is situated at Lajes do Pico and can be reached by flying to  Horta (Island of Faial) and then getting the ferry from Horta to Madalena do Pico, with a crossing time of just 30 minutes.

Activity
Meet the team at the activity based in Lajes do Pico for the whale watching excursion. Organised according to the weather and time of year, boats will set off from the port with a dedicated marine biologist. As you head out into the open ocean, they will explain more about the unique biodiversity of the marine area and why so many species can be found in this unique archipelago. During the three hour excursion, your skipper will be in contact with a ‘Vigia’ or lookout that will guide you towards the whales and ensure you see as many as possible. There are over 27 species of cetacean to spot – with some very special encounters with the ocean’s biggest – the blue whale! Once you have completed a circuit of the marine protected area, you will return to the port where your adventure will end.

Conditions
This activity operated during April – October and boats are organised according to tides and ocean conditions. Due to the nature of this tour, whale encounters are frequent but not guaranteed. Regular sightings include, Sperm whale, Short-finned Pilot Whale, Risso’s Dolphin, Bottlenose Dolphin, Striped Dolphin, Atlantic Spotted Dolphin & Common Dolphin. 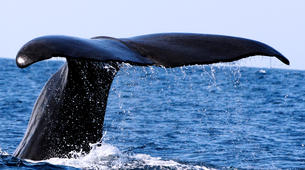 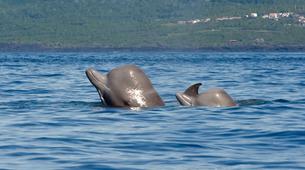 Average rating
5 / 5
Excellent
Very good
Average
Poor
Terrible
A must do when on Pico Island
JJames B. UK

Well organised and informative with very intuitive instructors and captain.