Whale watching from Angra do Heroísmo in Terceira Island

Whale watching from Angra do Heroísmo in Terceira Island
From

Experience an underwater Eden with whale watching expeditions in the waters around Terceira Island in the Azores.

A standard bearer for sustainability, the small Portuguese archipelago is one the world’s largest whale sanctuaries. With pristine waters teeming with a selection of different cetaceans big and small, this blip on the map is home to a third of the total number of all existing species. An ecosystem that can even accommodate the planet's largest animal (the blue whale), majestic whales and friendly dolphins make this wildlife trip worth the wait - and a bucket list experience for every animal lover.

Location
Terceira Island is one of 9 in the Azores archipelago. Part of Portuguese autonomous region, Terceira is the second most populated and the location of the Azores' oldest city, Angra do Heroísmo, the historical capital of the archipelago and UNESCO World Heritage Site. The international airport, located in Lajes about 2 miles from the city of Praia da Vitoria - with most activity happening around the coast with snorkelling, fishing and boat tours popular.

Activity
Assisted by a watchman located at the top of Mount Brazil, this 2-3hour whale watching tour will set off from the port and be guided via radio contact to whale sighting areas using real-time assistance. During the tour, guests are provided with various relevant information about the species of cetaceans sighted as well as why certain behaviours can be witnessed, it is also possible to spot dolphins through the glass bottom of the boat - offering another perspective of these beautiful and wild creatures. Year-round residents include sperm whales, common dolphins and bottlenose dolphins. Many other species (including blue whales – the largest animal in the history of the planet) pass through on migration routes.

Conditions
Whale and dolphin watching is possible throughout the whole year due to the great number of species existing in the waters of the archipelago. In addition to resident species, such as common dolphins and common bottlenose dolphins, with which you can swim, there are also the whales that pass through the Azores in their migration routes. Spotted dolphins are more common during the summer, while blue whales can be easily spotted at the end of the winter. Sperm whales, sei whales and bearded whales are frequent in the summer.

Please note: this activity operates with a 6-person minimum per tour. 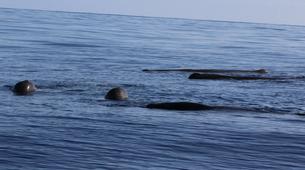 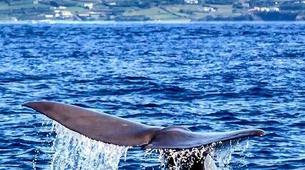 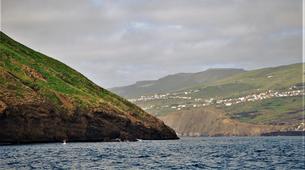 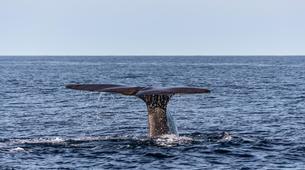 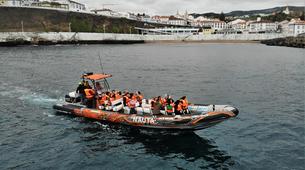 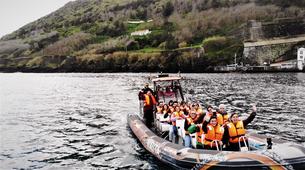 Your activity Whale watching from Angra do Heroísmo in Terceira Island