Start on the golden beaches of Uluwatu's infamous coast and soar on tropical thermals over the spiritual Bukit peninsula on this scenic paragliding flight. Overlooking the Great Temples that stretch out over the rugged cliffs, witness pristine secret beaches, blue seas, lesser known Hindu temples and waves breaking over coral reefs - fully organised and operated by an experienced pilot! All you have to do is relax and enjoy the view.

Location
Uluwatu is most well known for its landmark cliff-top temple. On the tip of the Bukit Peninsula of Bali, the Pura Luhur Uluwatu Temple is a Hindu temple that overlooks the Indian Ocean. Also of one the top surfing destinations in the world, it has four main breaks: The Bombie, Temple, Outside Corner, Racetracks, and The Peak. Close to Kuta, Uluwatu is served by the main international airport in Denpasar and is on the southernmost tip of the island.

Activity
Meet your instructor on Nyang Nyang beach for a 10-minute tandem paragliding flight over Uluwatu and the Pura Luhur Sea Temple. After a quick safety briefing, you'll kit up and practice a few running techniques on the beach. Once you're ready you will run along the beach and let the tropical thermals lift you into the air - gaining height, your pilot will be in total control of the flight, all you have to do is sit back and take in the views! Gliding over the shoreline, you'll have a chance to see the area's infamous surf spots, hidden beaches and sea temple - trimming the cliff and the exotic treeline. Descending back down to the beach, your pilot will perform a controlled soft landing on the sand - where you're paragliding experience will end.

Conditions
Due to Nyang Nyang's position on the peninsula in Uluwatu, tandem paragliding is available throughout the year. Please note Indonesia has two dominant seasons, the dry season is between April and September, rainy season November to March - which may affect weather conditions.

From May to August, the location changes (near Benoa, South Kuta, Badung Regency, Bali).

Children must have parental permission

Not suitable for expectant mothers or anyone with heart problems.

Tandem paragliding has a 1-person to 1-pilot ratio, group flights can be organised depending on capacity. 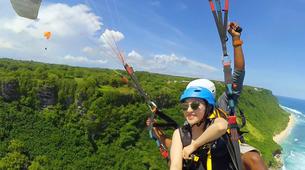 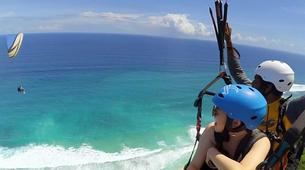 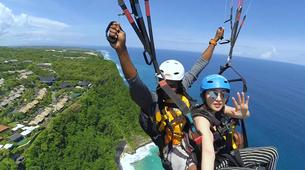 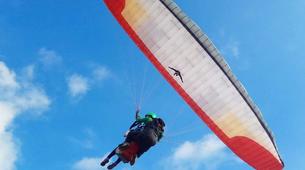 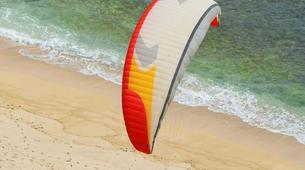 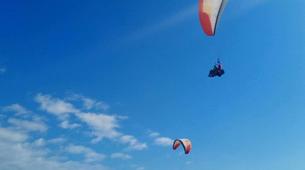 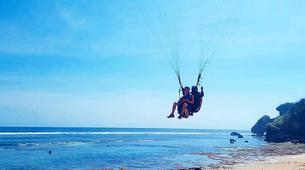 The activity was an excellent experience the people made me fell safe .The flight itself was totally amazing excellent value for money .If you come to Bali don't go home with out giving a try

Very well welcomed by the crew! We feel the crew’s plaisir sharing the flight with you.

Our 3rd honeymoon
NNur'abidah A. Malaysia

It was amazing
MMohamed H. Indonesia

The activity was very well organized

I booked this activity as a birthday present for my sister. I booked a slot online and we showed up at the destination (they were very easy to find on Grab). It was a very windy and slightly rainy day, so they explained to us that we might have to wait a little for the wind to settle down. They weighted us and explained what would happen. The wind barely got better but the rain seized, so they let my sister go first (in case it worsened again later - I wasn't too fussed about doing it on another day if today wasn't going to work). She received a helmet and there were lots of people helping her when they set off. She had an amazing time. They had to land on the beach because the wind direction changed but they landed very smoothly and someone was there to help them out of their gear and drive her all the way up the steep hill (with a motocross bike). When she arrived back at the landing spot, the guy at the desk explained that the wind wasn't great for flying. We already had horse riding planned for after paragliding, so I asked him if it would be okay to just reschedule. They were super sweet about it and said that that was no problem, gave us their Whatsapp and even said that because my sister's flight had lasted 7mins (instead of the promised 10min) due to bad wind, they would be happy to let her go again. We left feeling very well looked after with them apologising multiple times (I mean, it's really not their fault that the wind was strong but they were so sweet about it). The next day they messaged that the wind was perfect for flying, and we both got to go! I'm generally scared of heights (and airplane flights can be a nightmare) but my instructor was SO calm and lovely and the flight was so smooth that at no time during the flight did I feel scared. It was a really memorable, wonderful experience. Again, we both felt in absolutely capable hands. My instructor's apparently been flying for 20 years (4 of which tandem) - and he checked on me lots and made sure I was happy and enjoying the experience. The wind eventually did change again and despite a good few attempts we weren't able to land on the cliff, so again, he explained what would happen, that we'd land on the beach, when to pull your legs up - absolutely wonderful guy. I ended up in the air for 20minutes and enjoyed every bit of it. Again, went up by motorcycle and we both received footage of the flight transferred to my phone). I would absolutely recommend this place! Lovely people who really care about your safety and enjoyment. I normally don't write reviews but this really deserved some praise.

Great for first timer/ returning experiences with adrenaline rush and beach view. 10-15 minutes may not enough but you may opt to purchase another ticket for extension. Overall, its pretty fun experience and the staffs were friendly enough to share their local pluck orange.

This 10 minutes paragliding is super awesome.

It was fun and safe. Wonderful experience.

Nice view and felt so safe and relax up there

The activity definitely amazing, flying above the sea.