Make your dream come true and Fly a Real Fighter Jet over Pilsen! Here, you can fly a real fighter jet – even if you have never flown a plane on your own before!

One of the experienced flight instructors will be carefully preparing you for the flight, explaining the instruments and finally taking off with you.

We proudly present the first jet flight in the famous classic military fighter jet, the MiG-15 Fagot. The Mikoyan-Gurevich MiG-15 successfully intercepted UN fighter jets and bombers in the Korea War. The term “MiG-Alley” is well-known beyond aviation, military and history. It is the region around Yalo river (Korean: Amrok or Amrok-kang) between China and North Korea (DPRK), notorious for countless dogfights.

The MiG-15 Fagot is an incredibly powerful aircraft – often described as a big and powerful jet engine with a cockpit on top. Thanks to this design the MiG-15 Fagot needs its huge vertical fin; one of the characteristics of this classic fighter jet. The MiG-15 Fagot can reach a maximum speed of no less than Mach 1!

During the jet flight you have the opportunity to control the jet by yourself and perform stunning manoeuvres in the jet fighter aircraft. You'll be able to do loops, rolls, immelman turns and split-s.

Depending on the aircraft and location, spectacular low-passes above the airfield as well as supersonic flights are possible. The pilots will adjust the flight to your wishes whenever possible.

Let the adrenaline guide you and enjoy your day as a fighter pilot - this will be the day of your life.

All participants must be in good health. A medical examination might take place before the flight if the crew considers it necessary. 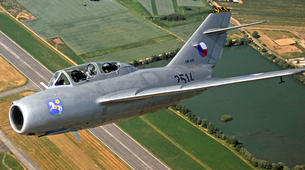 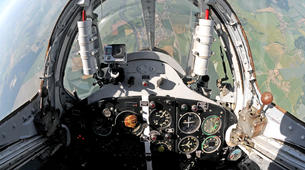 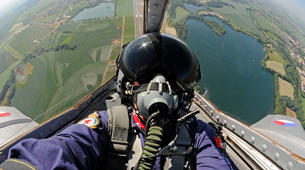 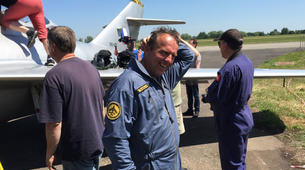