Join Club 4000! Summit one of Europe's highest peaks on this epic rock climbing excursion up to the Giant's Tooth at 4,013m!

Coined '“impossible by fair means”, Dent du Géant is considered one of the most rewarding yet challenging climbs in the Mont Blanc Massif after its moniker peak. A trail that has alluded many a meer mountaineer, this climb demands peak physical fitness and a serious head for heights...

Location
Situated between Colle del Gigante 3359 m and the Grandes Jorasses 4,206 m on the ridge running from the summit of Mont Blanc to Mont Dolent, Dent de Gèant is a rocky spire at 4,013m that can be easily identified throughout the Massif. The summit consists of two clearly identified peaks 30m apart: Punta Sella 4,009 m to the South-West and Punta Graham 4,014 m, the highest, to the North-East. On Punta Graham, a statue of Mary has been erected.

Activity
Using the Skyway lift in Courmayeur (Entrèves) to access Punta Helbronner, this full-day excursion requires a crossing of the Gengiva glacier to access the southwest face. The route has 8 pitches with some sections equipped with fixed ropes. The third and fourth pitches are situated close to the west edge with 45 meter high slabs cut by cracks, the Placche Burgener. The route has an AD  difficulty rating with V UIAA certification.

Conditions
A class 5+ climb on the SW face, this route demands a 3-point stance and includes steep climbing on small holds. Operating during July - September, the high altitude and exposed face mean this route is subject to extreme weather conditions and cold winds.

minimum 18 y/o
Cancellation policy:
moderate1) Cancellation 10 days or more prior to the agreed activity starting date
→ You are automatically refunded for the full activity price

3) 4 days or later, prior to the agreed activity starting date, is considered last-minute cancellations
→ No refund will be made
Offer Description

Descent - Three abseils (ropes 60 m) you arrive on the snowfield to the right of Burgasser (South wall), the last one is 10 meters.

Route, duration, and date subject to change based on weather conditions 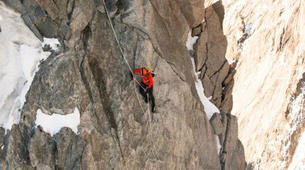 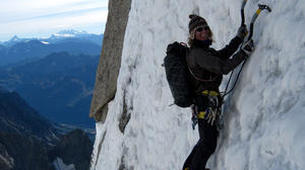 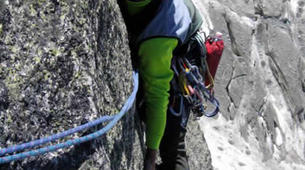 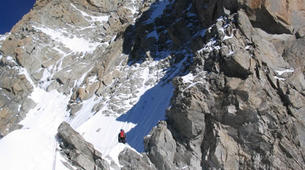 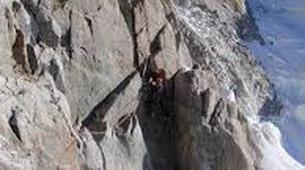 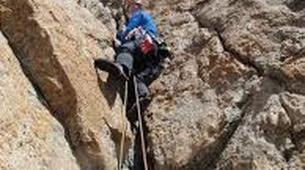 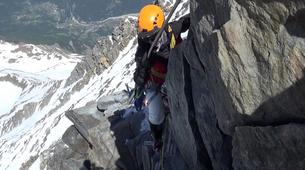 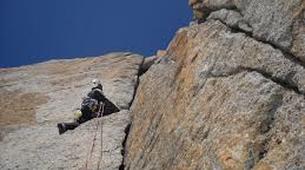