This is an epic helicopter tour that’ll give you astounding views of central Italy, taking you above some of the most iconic sights in and around Rome!

From there, you’ll fly to Tivoli where you’ll get to discover two of Tivoli’s most famous attractions: the archaeological site of Hadrian’s Villa and the breathtaking gardens of Villa D'Este, a 16-century villa that’s teeming with fountains, statues, grottoes, and water organs. You’ll also get to fly above the Travertino Romano quarries that’s home to the most famous type of Italian limestone which has been extracted since the age of the Roman Empire.

Your next destination will be the picturesque town of Bracciano where you'll get to fly above the well-preserved Odescalchi Castle that was built in 1470, the pure, volcanic lakes of Bracciano and Martignano, the spanning Roman countryside, and the Tiber river—the third longest river in Italy.

Don’t miss out on this unforgettable adventure where you’ll get to experience the best of the Lazio region in just one spectacular trip!

This is a private helicopter tour that is priced by group size:

This activity could be canceled or postponed due to weather conditions.

You’ll meet your pilot at the "Aerostazione” terminal in Rome Urbe Airport. Before you can fly, police checks will be carried out (it’s necessary for you to bring your ID card) and a safety briefing will be done. 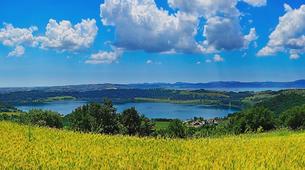 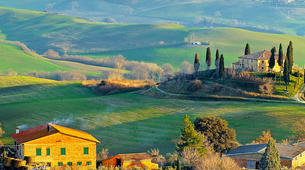 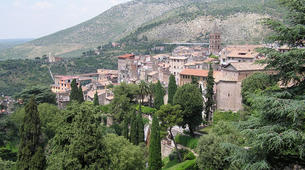 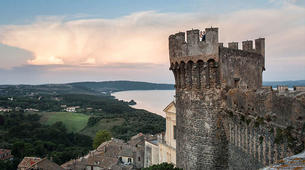 Your activity Ultimate Helicopter Tour of Lazio Region around Rome