Enjoy a thrilling excursion with this largest fish in the world in La Paz, a spot that benefits from the biggest concentration of whale sharks in the world!

Whale shark is the largest fish in the world and probably one of the most spectacular marine creatures on the planet. They can measure up to 60 feet and weigh up to 34 tons. These docile and huge fish are a great attraction for recreational snorkelers and divers. They feed mainly on plankton, seaweed, small fish and crustaceans.

Many whale sharks (male and female) can be spotted off the coast of Cancun, by the island of Holbox and by the island of Contoy. This is due to the circulation of currents that bring more food to the area. As a filter fish, whale sharks depend entirely on the good quality of their habitat.

Any modification could affect the conservation of their species. The characteristics of whale sharks such as their slow development, slow maturation, their size and longevity make them a fragile species.

Take this unique and magical opportunity of swimming with the giants of the sea in full safety, as they are inoffensive. La Paz has the greatest concentration of whale sharks in the world, with re-groupings of more than 400 specimens at the same place during the high season. Moreover, the excursion is carried out in clear waters, making it possible to perfectly observe them and to get a maximum benefit from this single spectacle in the world.

The day starts departing from the hotel at around 6:00 a.m. to take the road towards Punta Sam (in the North of Cancun).
Then, departure on maximum-10-people fast boats to go to the site.

Once the whale sharks are located, snorkelers go two by two into the water accompanied by a guide. Phocea is the only centre of the area that does not have to use life jackets to swim with these magnificent creatures. A shorty wetsuit is enough, so that the best swimmers can do a little apnea alongside these marvellous fish, which can reach up to 40 feet in length.

You can remain at the spot for as long as the group wishes, so that everyone can really take enjoy the outing. You may also come across manta rays and many dolphins along the way.

You'll then go to Isla Mujeres (the island located opposite the North of Cancun) to have lunch at a beach restaurant. Here you will have access to 'club cars' (golf carts), allowing you to do a one-hour tour to discover this beautiful island that has remained authentic, with its commercial streets and its deserted beaches. 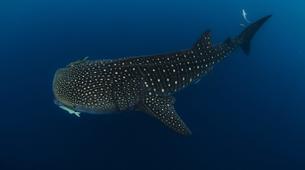 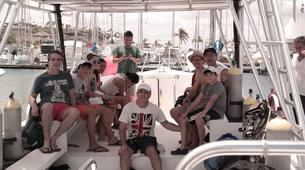 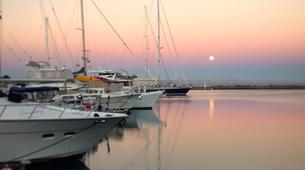 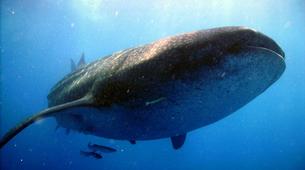 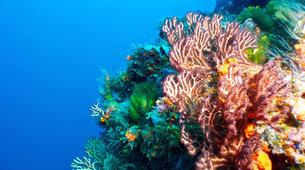 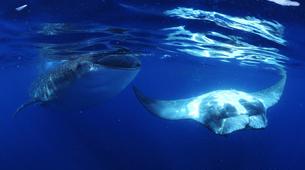 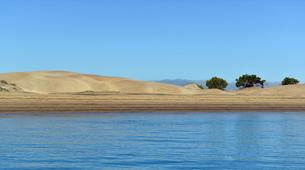 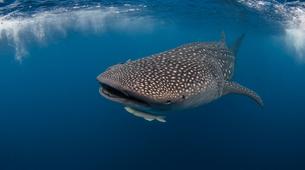 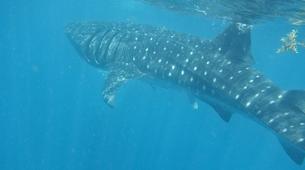 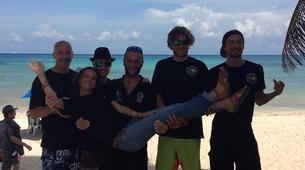 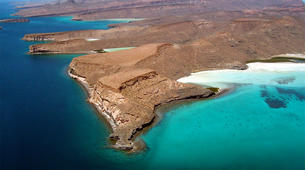