Tackle snowdrifts the size of two-story houses and unpredictable woodland terrain on this winter 4x4 adventure in Montenegro’s largest and most formidable national park. A landscape of contrasts hidden under an impenetrable veil of snow and ice, Durmitor National Park is defined and designed by the elements, usually closed off to the public during the harsh winters; explore its high peaks, abundant forests and deep gorges on this four-wheeled drive safari through its dramatic seasonal terrain…

Location
This activity takes place in Kolasin and travels to Zabljak via Durmitor National Park. A UNESCO protected area, it is home to the largest canyon in Europe (Tara), 17 glacial lakes and black fir forest – alongside important landmarks like Dobrilovina Monastery and Djurdjevic Bridge.

Activity
Meet your guide at the activity base in Kolasin for this 4x4 jeep safari through Durmitor National Park. A winter adventure with new challenges around every corner, this activity is suitable for all ages and ability levels, allowing you to experience the dramatic landscape first hand! Chauffeured by an experienced off-terrain driver, enjoy the winter scenery along the Adriatic road that passes Biogradska Gora National Park through the town of Mojkovac. Reaching the frontier of Durmitor National Park, experience the impressive Crna Poda – one of the oldest black pine forests in Europe dusted in a heavy snowfall. Following the Tara River, drive up to Dobrilovina monastery and Sveti Djordje church in the village of Gornja Dobrilovina – touring the infamous 16th-century frescos of Georgije Mitrofanovic that have survived the destruction over the years. Leaving the monastery, travel off-road to Djurdjevic Bridge – stopping to visit the Black Lake which is at the very heart of this UNESCO ecological reserve. After visiting the lake, a traditional lunch will be organized in a  local restaurant in Zabljak – returning to Kolasin where your adventure will end.

Conditions
Operating during the winter season from December to April, this 4x4 safari is a passenger-only experience chauffeured by an experienced off-road driver. This excursion travels through Durmitor National Park using national roads, woodland tracks and step-cut routes through the hardpacked snow. 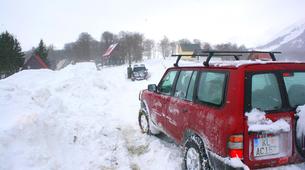