Experience Milford Sound by air on this scenic flight from Queenstown. Fly above the rugged backcountry of Central Otago, before heading westward to where the glacial fed rivers empty into Lake Wakatipu.

As you cross over into the Fiordland National Park, you’ll discover an untouched world of peaks and valleys, where mountains reach into the sea – a landscape forged by the rapid retreat of glaciers.

Soaring above Milford Sound you’ll get an aerial perspective of cascading waterfalls hidden amongst towering peaks, and the icy blue channel that flows into the Tasman Sea. From the luxuriant mosses and ferns clinging to sheer rock faces, to immense peaks rising straight from the ocean depths, the entire experience is truly awe-inspiring.

Fly across the mountain ranges and beech forests of the Southern Alps, above the famous Milford Track and over the Sutherland Falls before you reach the striking Lake Wakatipu and land at Queenstown Airport, rated one of the world’s most scenic landings.

You will fly over some incredible landscapes on your journey to Milford Sound. Depending on the flight route for the day, your sights may include; Skippers Canyon, Glenorchy, Mt Earnslaw, Mt Tutoko, Milford Sound, Mitre Peak, Arthur Valley, Sutherland Falls, the Milford Track, Lake Te Anau, Eglinton Valley, Greenstone Valley and Lake Wakatipu.

About Milford Sound
Milford Sound, the most famous fiord in the Fiordland National Park, is located on the south-west coast of New Zealand. The Te Wähipounamu region earned a World Heritage Status in 1986, recognised by UNESCO as one of great natural areas of the world.

Reaching from the mountains out to sea, the natural grandeur of Milford Sound was carved out over time by ancient glaciers, actually making it a fiord rather than a sound.

At the forefront of the fiord, Mitre Peak stands tall at 1692m. From the head of the fiord, it then stretches 16km out to the horizon where the Tasman Sea meets Fiordland. Lady Bowen Falls and Stirling Falls are two of the permanent waterfalls you’ll find in Milford Sound. Both of these waterfalls rise taller than the famous Niagara Falls!

This untouched region is one to add to your list of must-do’s while visiting New Zealand. Lose all track of time as you step back into a prehistoric world, a vast landscape that still to this day remains largely untamed.

Milford Sound weather
Milford Sound is renowned for its magnificent waterfalls that thunder down from high peaks into the depths of the fiord. It’s a region covered by temperate rainforest and the rain really gives Fiordland its unique character.

The weather can vary often, sometimes changing a number of different times in a single day. For this reason, it’s always important to schedule your flight for early on in your trip, in case it has to be postponed due to weather conditions.

Summer temperatures average around 18 degrees Celsius, while winter conditions can bring snow and cooler fronts. The region can receive on average up to seven metres of rainfall each year, which makes for a spectacular sight of the waterfalls on a day after heavy rain!

3) 10 days or later, prior to the agreed activity starting date, are considered last-minute cancellations
→ No refund will be made
Activity requirements

Can I travel to Milford Sound if I am pregnant?
You can travel on the flights if you are pregnant. There is no medical centre in Milford Sound so the choice to fly is at your own discretion. It is generally not recommended in the last 2-3 months of pregnancy as a precaution.

Can I take my infant/baby on the plane?
You can definitely take your young children with you on the plane. Infants up to 3 years and under 15kgs are free of charge and are required to sit on an adults knee. Child age is 4 - 14 years or an infant weighing over 15kgs.

The aircrafts have plenty of space to take strollers and buggies as well. The motion of the aircraft does put many of the young children to sleep – sometimes even before the take off!

Can you take disabled passengers?
Yes! Any disabled passenger must be travelling with another passenger to assist with getting into and out of the aircraft. The aircrafts have storage space to take wheelchairs and walking aids if required as long as they can fold down to fit in the planes.

Children under 4 get to fly for FREE! 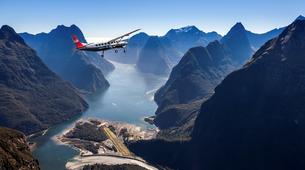 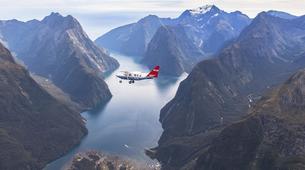 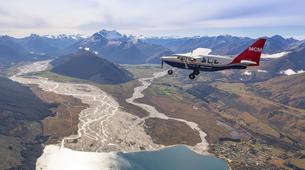 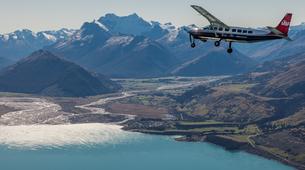 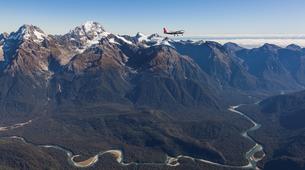 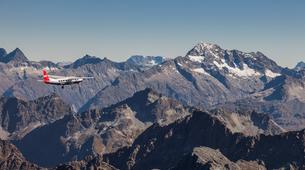 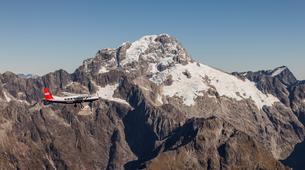 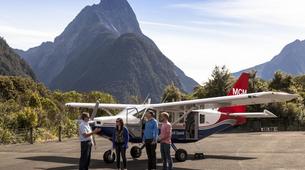