During the summer months, the boats of Ocean Blue Adventures travel around the Bay in search of a wide variety of potential sightings. This is a great activity for everyone to enjoy the marine life that can be found in the blue waters of the Indian Ocean.

The experienced instructors with an indisputable respect to the marine mammals contribute significantly to the preservation of these magnificent creatures' natural habitat. This activity is ideal to admire the beauty of the dolphins!

Views of graceful bottlenose dolphins diving in and out of the waves, visits of the large cape fur seal colony, pelagic and coastal birds sightings and the experience of being in the middle of group of feeding common dolphins could all be a part of your summer dolphin tour in Plettenberg bay. You may have the opportunity to see the rare Humpback Dolphins or an elusive Bryde’s whale found in only certain areas of the South African coastline, and both part of important research projects in the Bay.

Book your tickets now and come closer to the simplicity of the marine life!

The Ecological adventure leaves from Central Beach with an exciting beach launch and heads east past the bird sanctuary and Keurbooms beach to Arch Rock.

There you usually encounter Bottlenose and the rare Indo-Pacific Humpback dolphins, as well as some shark species.

From Arch Rock you will head into the middle of the Bay where pelagic seabirds are normally to be found some 7km from the shore. Out there, you might see the resident Bryde’s whales, as well as Common dolphins or Southern Right and Humpback whales during their season.

You will then cross the Bay up to Robberg Peninsula and out to the Wild side, often seeing groups of whales and pods of dolphins.
Cruising back along the inside of Robberg, we see the unique geology from this unusual viewpoint and can observe our growing Cape Fur Seal Colony.

In the end, you will head back along the Robberg beach, while listening to a brief rundown on the history of the area. After passing by the Beacon Island Hotel, built on the site of an original Whaling Station, the tour ends with an exhilarating landing, again on Central Beach.

Do wear warm clothes and a wind breaker as it gets chilly out in the ocean. 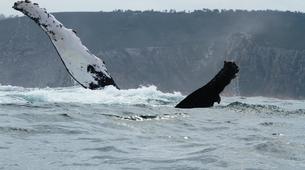 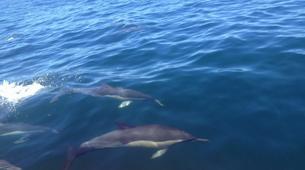 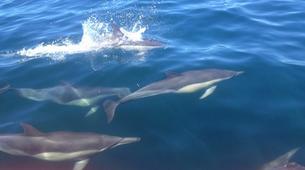 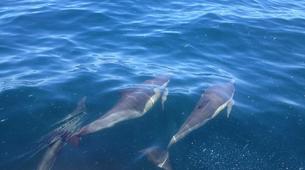 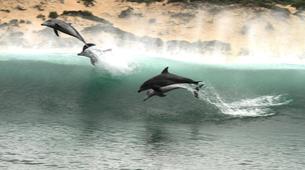 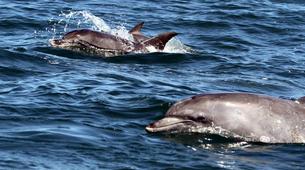 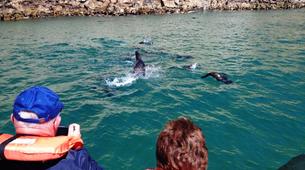 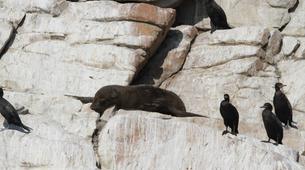