Home to not one but two crater rims, Nguna Island tells the tale of Vanuatu’s fiery past and vibrant future. Touchdown on an extinct volcano and witness its distinctive landscape from the air, exploring ancient lava flows decorated in tropical reefs and verdant summits crowned in rainforest – flying over the Nguna-Pele Marine Protected Area.

Location
This activity is run & operated from the Seawall in Port-Vila, on Efate Island as part of the island nation of Vanuatu. The tour travels to Nguna Island (30 minute return flight), an extinct volcano located in Undine Bay, between Pele Island to the east and Moso Island.

Activity
Head to Port Vila for this helicopter flight to Nguna Island. An extinct volcano now part of a proud marine protected area, this tropical island has become home to some of the world’s most endangered species – offering sanctuary for sea dugongs, turtles and whales in its colourful reefs. Travelling from the shoreline to the floating jetty via a glass-bottomed boat, join your pilot for this unforgettable scenic flight & volcano landing. Leaving the turquoise reefs of Port Vila behind you – this flight takes you past Hideaway island and the Cascade Waterfalls, following the coastline to Havannah Harbour for sightings of turtles, Dugong, dolphins and whales in their natural habitat. Soaring high over Mount Marow on Nguna Island, touch down on the crater rim for an incredible photo opportunity, standing on the edge of an extinct volcano with views across the nearby reef. An exhilarating departure off the Volcano then takes you back across Efate Island over the dense jungle and deep canyons before arriving back on the pontoon in Port Vila.

Please note this activity operates with a two-person minimum per tour. 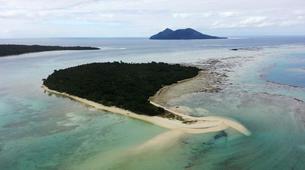 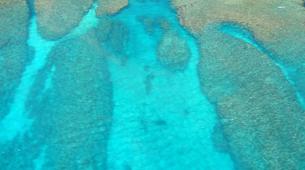 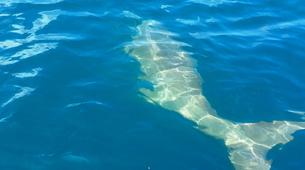 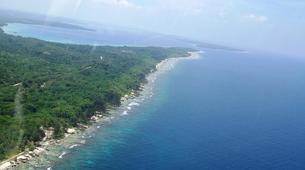