Join the Ivanhoe team for what will undoubtedly be a memorable 2 hour Big 5 Sea Safari. Their goal is to target Walker Bays Big 5; Whales, Dolphin, Seals, Penguin and Marine Birds.

You'll depart from the harbour of Gansbaai and cruise along the scenic route passing the cliffs of De Kelders and De Platt Beach. Observe the stunning coastline, contrasting white beach's with the blue skies and chameleon waters that stretch for miles from Gansbaai to Hermanus, you'll then set course and head out into the middle of the bay in search of the Big 5.

Bottlenose Dolphins are often seen on the trips and if you're lucky enough to encounter a school this is the time to grab the zoom lens as Dolphins love to entertain and it’s a photographer’s paradise.

On return to Gansbaai harbour pay more attention to Danger Point, this is often where you find the resident Bryde's whales of the area.

Bryde’s whales are hunters and feed on a wide variety of fish, mackerel is common to the waters as well as planktonic, crustaceans, and cephalopods. Bryde's whales have an upright, falcate dorsal fin that is up to 46.25 cm (18.21 in) in height, averages 34.4 cm (13.5 in) and is usually between 30 and 37.5 cm (11.8 and 14.8 in). It is often frayed or ragged along its rear margin and located about two-thirds of the way along the back.

On your journey, the crew will educate you on all aspects of marine life, with a qualifying Marine Biologist and a Skipper with over 15 years experience there is a wealth of knowledge for you to tap. No trip is the same and there is no guarantee to what you'll see. Whatever animals you come across, they're sure to be an avid photographer's dream!

Finally, the past must not be forgotten, Danger Point is also famous as this is where the British iron paddle-wheel frigate HMS Birkenhead, weighing 1400 tons, was tragically lost. This stretch of water has earned its reputation by default, the Big 5 Sea Safari is dependent on the water conditions at danger point, if the water conditions for this area will not deliver a memorable experience your trip may switch to our Walker Bay Big 5 Safari as the team always strive to deliver an experience you will treasure for a lifetime, and you must respect this stretch of water.

Admire the beautiful coastline, spot the local Oceans big 5 while you sit back and sample a selection of locally produced fine cheese and wine. Enjoy sampling a platter of cheese produced by the Klein River cheese factory. The factory can be found nestled on the banks of the Klein River, surrounded by lush green hills and mountains. They use Jersey and Ayrshire milk collected from 2 neighbouring farms to produce a selection of 13 types of cheese.

Taste a selection of wine from the Raka wine estate. The Raka brand was named after Piet Dreyer's black fishing vessel. Piet's first love has always been the sea. For some 36 years, he braved the storms and challenges of the coast, ever in search of the best catch. It is with the same passion that the Dreyer family now pursue the art of winemaking.

What you could see
While no two trips are ever the same, from years of experience the team has come to expect sighting of whales, dolphins, sharks, seals and an array of coastal marine fish and birds.

Although sightings of the Southern Right Whales have decreased in the past two years, there are more sightings of Brydes and Humpback Whales than ever before. The dolphin sightings are awe-inspiring and include the every mischievous Bottlenose Dolphins, the spirited Common Dolphins as well as endangered Humpbacked Dolphins. The Cape Fur Seal population is ever increasing and you are sure to see these and perhaps even a Great White shark.

While sightings of any particular species cannot be guaranteed, there are species found in the Bay at certain times of the year, which gives a good indication of the likelihood of their occurrence. Remember, this is a guideline founded on experience; animals are being observed in their natural surroundings so no guarantees can be given on any species

Dolphins
Dolphins can be seen in the Bay all year round. The playful Common Dolphins live in pods and they will often follow boats for the duration of the trip. The Humpback Dolphins are a little less playful and somewhat shy. They are not known to interact much with the boats and they are highly endangered. You will recognize them by the hump they have just below their back fin.  Everyone’s favoured dolphin is by far the Bottlenose Dolphin. These dolphins are the largest of the dolphin species and they are usually seen jumping and surfing in the waves.

Bryde's Whales
These whales can often be seen in the Bay all year round. These whales are fast moving and can grow to be up to 14m in length and weigh a bulky 13 tons. They are most often seen in small pods of 5 or 6 whales.

Humpback Whales
Humpback Whales can be seen in the Bay from June to December (whale watching season). Humpback whales get their name from the hump they have on their backs.  They can grow up to 15m in length and weigh in at a staggering 35 – 45 tons. They are often seen jumping out of the water and showing off.

Minke Whales
The Minke Whales can intermittently be seen in the Bay. They are the slightest of the Baleen Whales growing to roughly 10m in length and weighing in at approximately 3 tons. These whales have a distinctive look, long flippers with light white stripes running along them. They are inquisitive and will often approach the vessel. They will good-naturedly swim past the boat or cause almighty splashes by breaking clear of the water in close proximity to the boat.

Orcas
Orcas can intermittently be seen in the Bay. Orcas are actually the largest of the dolphin species and have been found to be very friendly towards people. The male Orcas can grow up to 8m in length weighing in at approximately 8 tons. They can often be seen jumping out of the water or gently floating belly up.

Sharks
A wide variety of sharks can be found in the Bay. Besides Great White Sharks, you can also intermittently encounter Ragged Tooth Sharks, Hammerhead Sharks as well as Mako Sharks.

Children under 5 get to go for FREE! 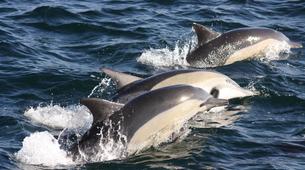 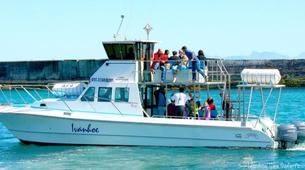 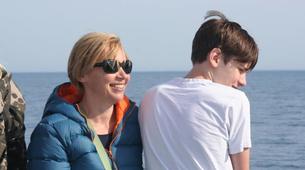 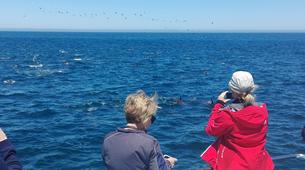 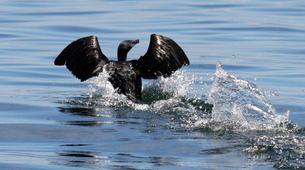 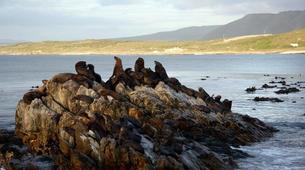 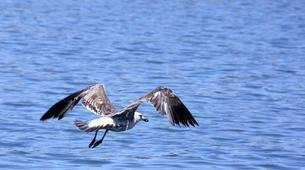 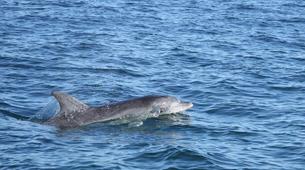 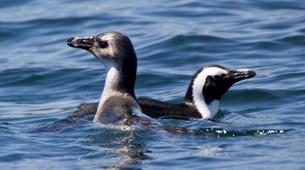 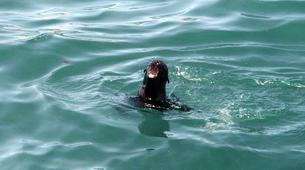 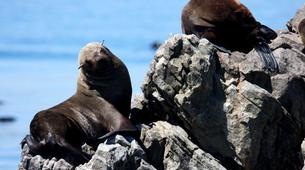 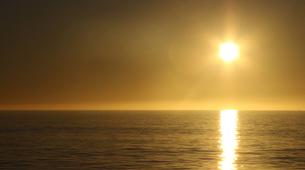 Insightful, educational, and well worth every penny!