The single most unique feature that differentiates the predatory activity at Seal Island in False Bay, is the way in which natural predation takes place.

Seal Island
Nowhere else on the planet will you find a place to watch how white sharks during the winter months, make use of the hunting technique, which they have perfected for the particular topography around Seal Island, in such regularity.

The topography around Seal Island is ideally suited for the white sharks to make use of a hunting method that is especially adapted for this type of terrain, with deep drop-offs dropping down to between 60 and 120 feet within a couple of meters away from the Island.

The predation
During early morning before sunrise, sharks drop down to the depths around Seal Island and patrol the perimeters of the small Island with its 50,000 strong Cape fur seal population. It is during these early periods of dawn when the urge to feed forces them off the island to go and eat, or when they're heading back to their safe haven where they can rest after a hunt, that they are at their most vulnerable. This gives the great white sharks the perfect opportunity to pounce on their prey, the seals.

The low light at dawn, which limits visibility for the seals, aids the sharks, as they swim up from 80 feet down, attacking the overhead swimming seals with great speed and stealth, using their dark top-side colour as camouflage.

If successful in its approach, the one ton shark flies out of the water, hitting the swimming seal with such force, that the attack ends in a couple of seconds with devastating effects.

If however, the seal sees the approaching shark in time, it results into the most spectacular aerobatics marine life has to offer for humans to witness. But sometimes even the best swimming manoeuvres and efforts of the nimble fleeing seal is not enough for it to escape, the non relenting chasing and flying "air jaws'" of the white shark in hot pursuit. If the chase is unsuccessful, the seal usually swims away in high fashion, with the shark disappearing into the depths of False Bay again, preparing itself to launch another attack on a later occasion.

As the sun starts rising and the sun ray's penetration improves visibility in the water for the seals, the element of surprise, to attack the seals, becomes less and less feasible, resulting in decreased surface activity. The surface attacks and activity only increase towards late afternoon again.

If you are a nature lover, try not to miss out on this spectacle. Plan your trip around it if you can. The best time to witness this natural phenomenon is during the mid-winter months between mid-April and mid-September.

If you are prone to motion sickness, please take sea-sickness tablets beforehand. Take one the night prior and one again an hour before commencing the excursion.

You may purchase a disposable underwater camera from Shark Adventures. 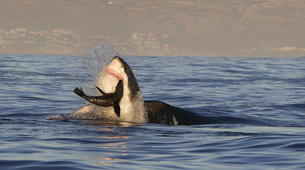 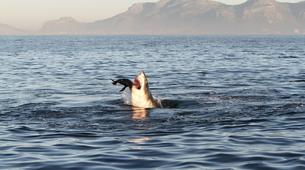 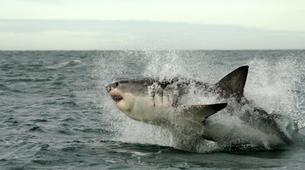