Half day canoeing excursion on the Upper Zambezi

This section of the river is quite unlike the better-known section below Lake Kariba. The Upper Zambezi has numerous heavily wooded islands, which are dissected by channels that may be several kilometres in length and vary in width from one to twenty metres. The vegetation predominately consists of ebonies, waterberries, palms and a tremendous variety of acacia and albizia. The rapids are small and at their peak are only classed as grade two, which is the second easiest grade.

The canoe trail passes along the banks of the Zambezi National Park, where clients have a good opportunity of viewing various species of animals, such as elephants, buffaloes, impala, kudu, hippo, crocodile etc. The birdlife is prolific with at least 50 common species of bird that can be seen from your canoe.

The Upper Zambezi River is regarded as free flow, as a dam cannot control the water flow and as such the water is subject to seasonal variation. Floods begin in November and normally peak in April/May. Therefore, throughout the season the route varies as new channels open with the rise in water level.

The canoe float operates above the Victoria Falls in Zimbabwe on the stretch of the Zambezi River between the Mine Fields and the Big Tree take out point, running along the banks of the Zambezi National Park.

- You will be picked up from your lodging and transferred to the Adventure Lodge for check in.
- You'll enjoy a short game drive from The Adventure Lodge (approximately 15 minutes) to the canoe start point, which is upriver at the Minefields put in.
- On arrival you'll be given a safety talk by a professional river guide.
- You'll then practise your paddling skills before setting off on their canoe and raft float.
- You'll be offered soft drinks and water during the canoe float.
- You'll spend anywhere up to 1.5 hours on the water (water level dependant).
- You'll savour a light lunch consisting of cold meat, rolls and salad on an island.
- During lunch on the island you'll be served wines and beers.
- You'll be transferred from the take out point back to your respective lodging.

Do not forget to bring
Meeting point
You will be picked up at your accommodation anywhere in the Victoria Falls in Zimbabwe. Not Zambia Get directions 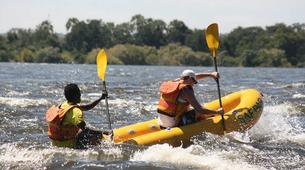 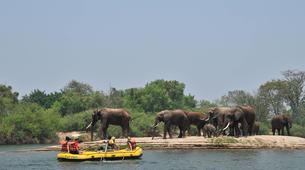 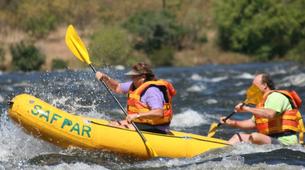 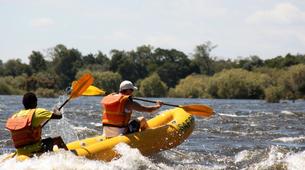 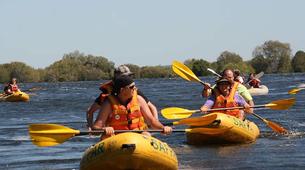 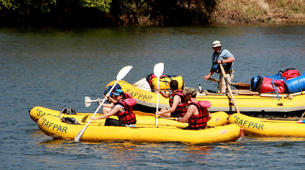 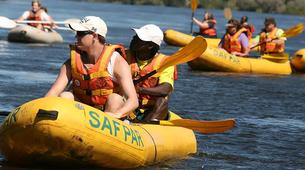 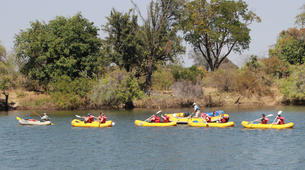 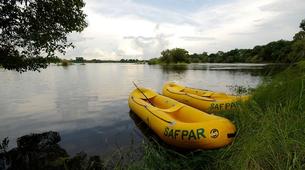 Your activity Half day canoeing excursion on the Upper Zambezi